There is plenty to see in Hanoi when you are visiting Vietnam. This Hanoi sightseeing guide is here to ensure that you see everything there is to see on your trip.

The Ho Chi Minh Mausoleum in Hanoi is one of the most important sites in Hanoi. The building and guards are a stunning sight to see in particular at night when it is lit up.

The mausoleum is front of a large grassed area where many people exercise in the evenings but it is also close by to the One Pillar Pagoda, a museum and the botanical gardens so you can enjoy a few activities at the same time. 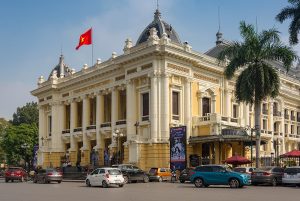 The opera house was constructed over 100 years ago during the French colonisation hence the French architectural design. The opera house hosts many different shows with tickets available at the box office in the front of the building. It is a popular spot in the evenings for people to hang out and it is common to see many motorbikes parked there as people relax on the steps.

The opera house is also home to a coffee shop with seating on the side or inside so that you can enjoy a coffee whilst enjoying the view of the building.

The temple of literature is nearly 1000 years old yet thanks to some reconstruction which has taken place in recent years it is still in great condition. It is separated into a number of different courtyards which extension gardens, ponds and buildings. Inside the building are some art work and statues, there is often traditional music played inside. 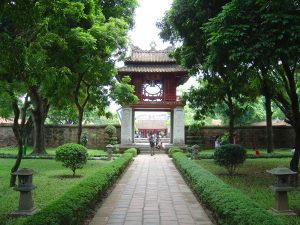 Built over 100 years ago during the French colonisation this was the first bridge across the Red River connecting Hanoi to the major sea port of Hai Phong.

The bridge has become an iconic symbol of Hanoi in part due to the war where it was often targeted by American bombers but repeated repaired and rebuilt by Vietnam.

The bridge is still in operation now with a train track running through the centre and motorbike lanes on either side. The train passes over the bridge a number of time a day and is a unique sight to see especially during rush hour as many motorbikes cross. 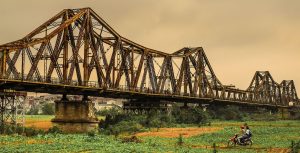 This temple is located on Hoan Kiem lake in the centre of Hanoi. It was constructed in the 19th Century in honour of Tran Hung Dao, an important military commander from the 13th Century. The enter the temple you cross a striking red bridge across the lake.

The island on which the temple is located is covered in trees and statues making it one of the most beautiful temples Hanoi has to offer and difinitely one of the most unique. 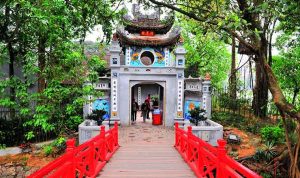 Constructed in the late 19th Century with an architectural design to resemble Notre Dame of Paris. It is named after the patron saint of Vietnam, St Joseph.

The cathedral hold mass several times a day with the Sunday evening service being particularly busy.

The cathedral is located with a small square in front and a number of near by coffee shops offer a view of the cathedral allowing you to enjoy the view with your morning drink. 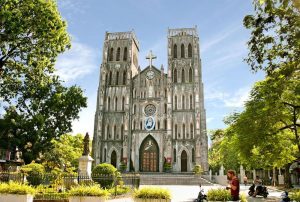 The prison was built in the late 19th Century as a French prison and was finally demolished in the 1990s although the gate house remains as a museum.

During the French Colonisation the prison had a fierce reputation of bad conditions, torture and overcrowding. The prison became well known during the Vietnam War as many American pilots were housed here. The prison was nicknamed the ‘Hanoi Hilton’. 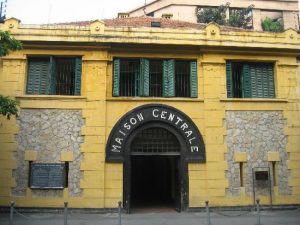 The Hanoi train street has become famous amongst tourists as a place for a unique picture. The train tracks are easily accessed as there are houses, coffee shops and even a bar on the tracks so that you can enjoy a drink whilst the trains come past. This is particularly good to see in the evening from Ray Quan rice wine bar. 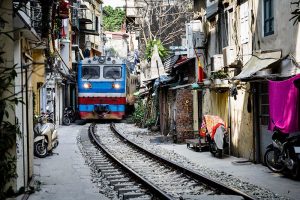 Originally build 1000 years ago the citadel was the home to the Royalty for a long time until they moved to Hue. Although much of the ruins have been lost of the years there is still a large section intact most notably the Northern gate house and the Flag pole in the South.

The citadel has been used as a prison for French troops during the Japanese coup and was used as a Vietnamese headquarters during the Vietnam War. 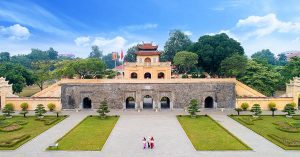 The Hoan Kiem lake is the most famous lake in Hanoi with many stories and tails being created about it. In the centre of the lake is the Turtle tower.

The lake is best enjoyed when the surrounding streets become a walking street in the weekend evenings. There is will large crowds enjoying games, food and drinks in the area. The north side of the lake often has a stage setup for some performances. 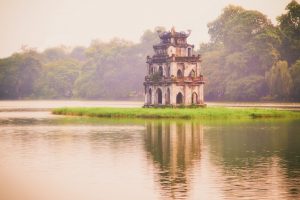 Located just behind the Ho Chi Minh Mausoleum this is one of the most famous temples in all of Vietnam.

It is nearly 1000 years old and unique in that the structure is only supported by one pillar hence the name. It was constructed by the Emperor after he had a son which was foretold to him in a dream. A monk then told the Emperor to construct the pagoda in a lotus lake similar to the one in his dream. 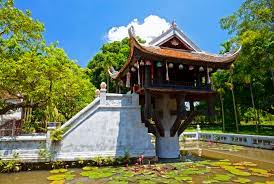 The water puppet show is an a traditional way of story telling and the Thang Long Theater has now become part of the culture of Hanoi having been here for 50 years. The show is performed on a small lake with puppets and has many shows each and every day.

It is often performed with traditional music and although the story might be hard to follow as it is not in English it is still a enjoyable performance to watch. 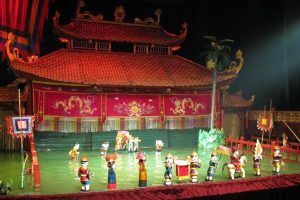 The Bat Trang village has been producing ceramics for hundreds of years thanks to its location on the Red River and the clay deposits there. They are still producing many of the ceramics that are sold in Hanoi and is a good place to get souvenirs in particular vases and tea sets.

The village often has tours running from Hanoi which allow you to try your hand at making some ceramics yourself but don’t expect to be good the first time. 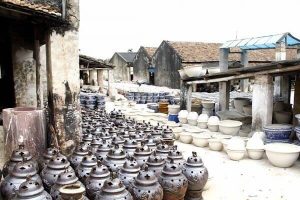 Price – Free, but can book via a tour

Below is our map showing the location of the above sightseeing places as well as some of our favourite food and drink places to visit whilst in Hanoi, you can see more about them on the link below.

To open this map into Google maps just click the square in top right.