With the development of technology, adventure bikes are becoming more flexible and safer than they used to be. Therefore, many bikers have chosen this vehicle as a companion for their whole journey.

The emergence of sportbikes with a variety of brands and models is increasingly helping to reduce the overall price of motorcycles. However, that suits the budget of the Vietnamese people. As a result, more and more users in Vietnam are choosing motorcycles as a means of transportation in the city as well as for long journeys. So currently, which adventure bikes are good choices for users in terms of design and price?

Here are the best adventure bikes for beginners you should know!

In the segment of large-displacement vehicles, Yamaha MT-03 must be a good choice. As a naked bike, it has a quite comfortable sitting posture. The handlebars and the wide steering help control MT-03 easier for moving in the city and on tour trips. 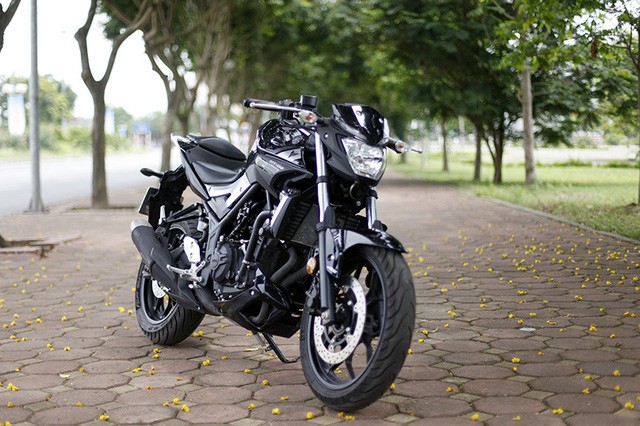 This adventure bike was upgraded from the Yamaha R3 version. Hence, it has the same chassis and twin-cylinder engine with a capacity of 321cc. Not only that, but the bike also has a 41,5 horsepower and a maximum torque of 29.6 Nm. Currently, the price of Yamaha MT-03 by Yamaha Vietnam is listed at 139 million VND.

Kawasaki Z300 is the naked version of the Kawasaki Ninja 300 sportbike model. The vehicle inherits the design from the elder Z800 with a powerful appearance. The bold lines are most clearly shown with the twin headlights at the front.

Its engine is also a double, liquid-cooled cylinder with a capacity of 296 cc. Besides, the bike also features a 6-speed gearbox, a 39 horsepower as well as a maximum torque of 27 Nm. 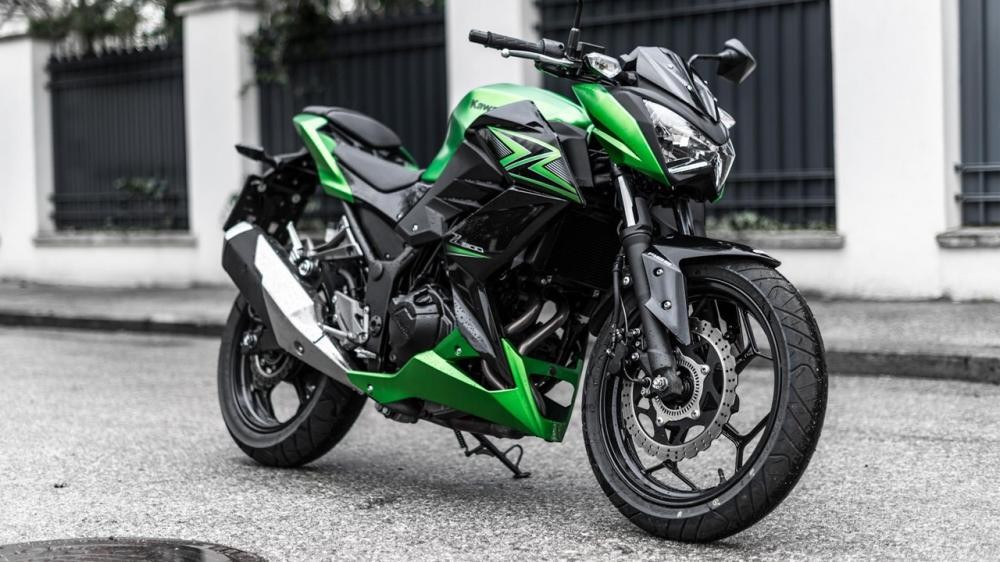 Like MT-03, Kawasaki Z300 also has a naked design, so the sitting posture is very comfortable and suitable for moving in the inner city as well as the backpacking journey. However, in comparison, its style is more aggressive and fierce than Yamaha MT-03’s.

At present, the price of Kawasaki Z300 by Kawasaki MaxMoto Vietnam is 139 million VND.

Standing in this position should be the senior KTM Duke 390. However, after being updated to the latest version in 2018, its price has been raised to 175 million VND. This is not very pleasant for the Vietnamese people. However, no bike could replace it because of its special design.

KTM Duke 250 is considered as a naked version between Duke 390 and Duke 200 in order to give users more options. But KTM Vietnam has completely replaced the Duke 200 with the Duke 250. 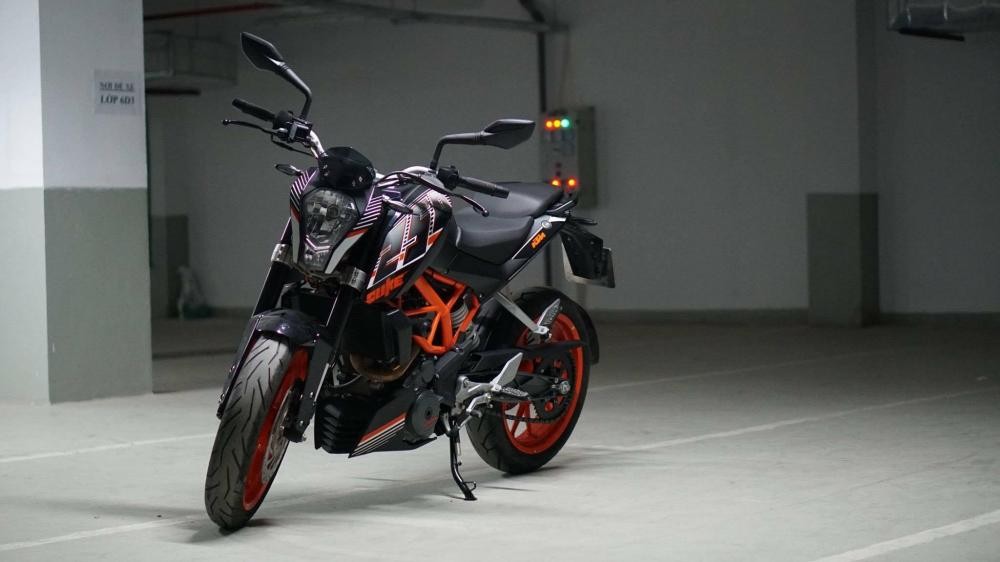 The adventure bike has the same appearance and design of the 2017 KTM Duke 390. It owns the design of the first generation with long and convex headlights. Furthermore, its chassis also belongs to the old generation of the prominent orange lattice. The seating position of the bike is also considered to be more straight, making it feel like you are sitting on a supermoto.

Unlike the twin cylinder engines of MT-03 and Z300, Duke 250 owns a liquid-cooled, single cylinder engine with 248.8cc. It also produces a maximum capacity of 31.3 horsepower and 24 Nm torque. The adventure bike costs 109 million VND on the market.

Benelli BN302 is a naked bike from the Italian brand – Benelli. Although the bike is manufactured in China, but its quality and features are still highly appreciated. Competing directly with its rivals like Kawasaki Z300 or MT-03, the price of the bike is quite affordable – 108 million VND. This is also considered as a great advantage of Benelli BN302 compared to the two competitors from Japan.

The overall design of this one does not really stand out as the appearance is simply a naked bike. The front of it is somewhat similar to the first KTM Duke’s, but still creates its own highlight thanks to the softer design. 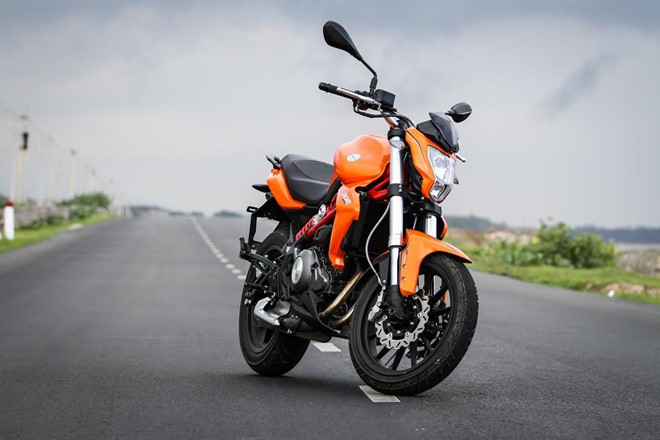 This adventure bike owns a liquid-cooled, twin cylinder with 300cc. The horsepower is 38 and the torque is 27.4 Nm.

A detail which is an advantage and a major drawback of this bike is the wet weight up to 196kg – the heaviest in the naked bike segment of 300cc. However, thanks to its heavyweight, when riding at high speeds, you can feel that it is quite firm. Also, its ability to accelerate with the maximum speed is not as strong as MT-03 and Z300’s.

While the other bikes on this list are all modern and sporty, Honda Rebel 300 is a bit classic. Owning the name Rebel, the appearance of the bike looks like a cruiser in many years ago, but Honda also slightly modified it to be able to keep up with the times.

Overall, the Rebel 300 is a cruiser with a new, tidy and sporty look. The indispensable thing on this bike is the round headlight with halogen bulbs. Also, the high steering wheel and the low saddle are divided into two distinct parts. 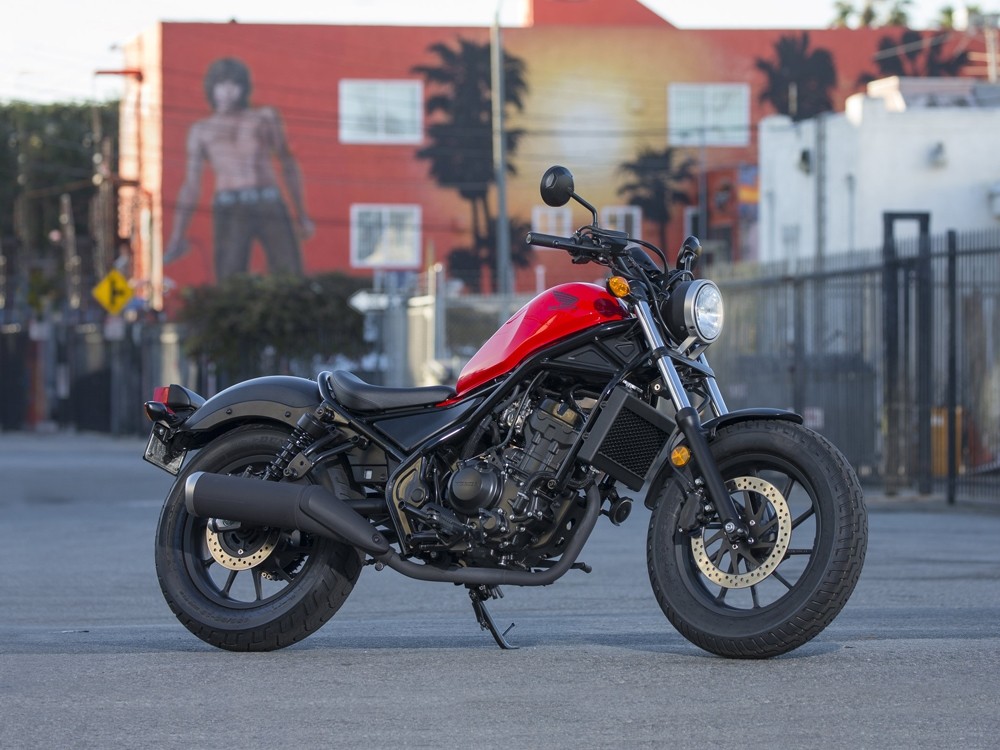 A little disappointed thing here is its engine. The 300cc block is small, but the space between the frame and the engine is quite large. Therefore, it might create a feeling that the bike is not seamless.

Rebel 300 was officially distributed by Honda Vietnam at the end of March, and the price of it was listed at 125 million VND.

The vehicle in overalls looks like a classic scrambler but possesses a range of modern equipments such as LED lighting, reverse shock and anti-lock braking system ABS. 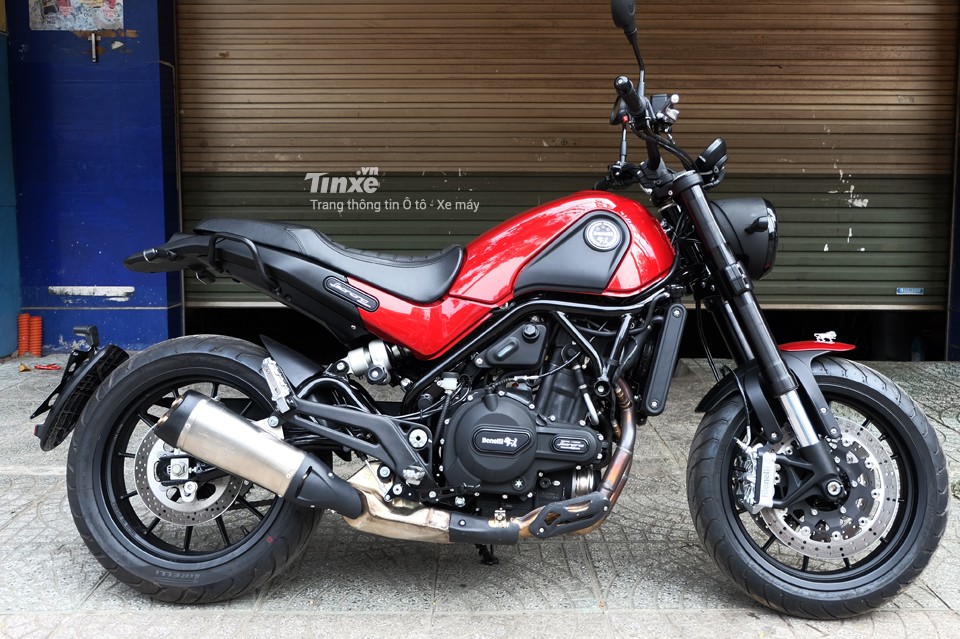 Thanks to that design, the shape is quite compact and low, so it is quite suitable with the physique of many Vietnamese users. Possessing a 500cc double cylinder engine block (the highest on this list), Benelli Leoncino has a capacity of up to 47.6 horsepower and maximum torque of 45 Nm.

Despite the larger engine, Benelli Leoncino has a wet weight equivalent to Benelli BN302 (196kg). Once again, heavy vehicles will be more secure when travelling at high speeds. Besides, the comfortable sitting position, as well as the wide steering wheel, make control the bike easier, whether you are in the streets or on a tour. Currently, this adventure bike is being sold at 148 million VND.

The Kawasaki Versys-X 300 is basically a small displacement adventure-touring bike. With its tall appearance, large headlights and windshield and rear trunks, the X 300 is a great choice for those who love to explore and have a long and confusing journey.

Because of its good features, the motorbike can handle different types of terrain. It has a long-travel suspension with the wheels (19  inches front and 17 inches rear). The windshields, high rear trunk and exhaust pipes are also parts of this ability. Besides, the bike’s fuel tank has a capacity of up to 17 liters, helping reassure drivers on long journeys. Despite being classified as a multi-terrain vehicle, the Kawasaki Versys-X 300 is also equipped with a single channel ABS.

The power of the bike comes from the liquid-cooled, twin-cylinder engine with a capacity of 296cc. It produces 40 hp and a maximum torque of 25.7 Nm. If you love long hills, the Kawasaki Versys-X 300 is a great choice with good multi-terrain capabilities and moderate weight.

At present, the price of it is 149 million VND. However, if you want a motorbike which is equipped with the full light support, anti-dumping frame and rear trunks, you must choose to buy the Versys-X300 Tourer version for 169 million VND.

In the future, when KTM launches the KTM 390 Adventure, consumers will have one more option in the light adventure bike segment. However, the expected price is quite high (approximately 200 million VND).

Unlike the Kawasaki Versys-X 300, the Benelli TRK 502 seems to be more sport-touring than adventure-touring, with 17-inch cast wheels and tubeless tires.

The bike has a very protective appearance, not to mention the sport-touring or adventure-touring models such as Ducati Multistrada 1200 or BMW R1200GS. In return, its price is even cheaper than a 500cc sport-touring when listed at 136 million. 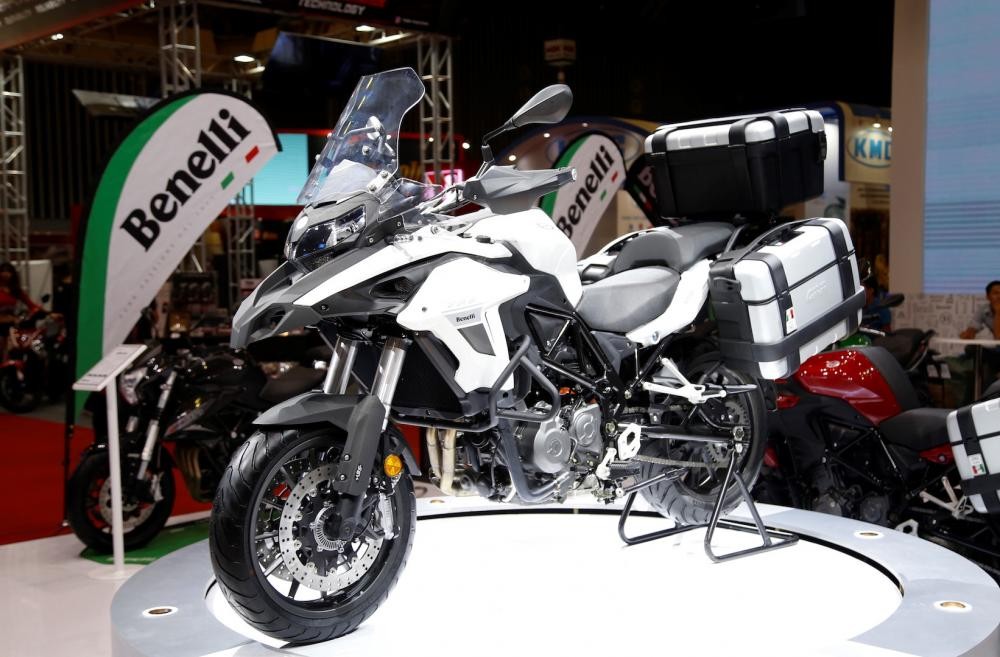 Overall, Benelli TRK 502 impresses with its strong and powerful style. Similar to the heavy touring models, the bike is equipped with the two right-side front fenders and tires under the headlight. It also features protective arm guards in front of the handle.

The windshield is assembled with the twin headlights. The trellis frame, as well as the Led indicators and LCD screens, are good support when travelling. There are a side mounting bracket and a very convenient trunk at the rear.

Sitting posture of the bike is also very comfortable when the steering wheel is arranged quite high. However, with a wet weight of up to 240kg and a height of 815mm saddle, the Benelli TRK 502 requires users to have good stature and stamina to be able to “wrest” the bike in the most comfortable way.

After being adjusted the price from 155 to 149 million, KTM RC 390 is also selected to become one of the most reasonable priced motorcycles for beginners. From there, they could get acquainted with large displacement motorcycles.

Although the RC 390 is designed based on the chassis and engine of KTM Duke 390, it brings a new and sport style. Instead of a single headlight, the grille with a pair of projector LED headlights, the front end has a sharp and fierce design. It is accompanied by a windshield and pretty lights integrated into the rearview mirror. Similarly, the rear also has a sharp design, making the whole vehicle very neat. A quite special point is that the rear seat has an upgraded saddle design, which helps increase the sportiness of the vehicle. 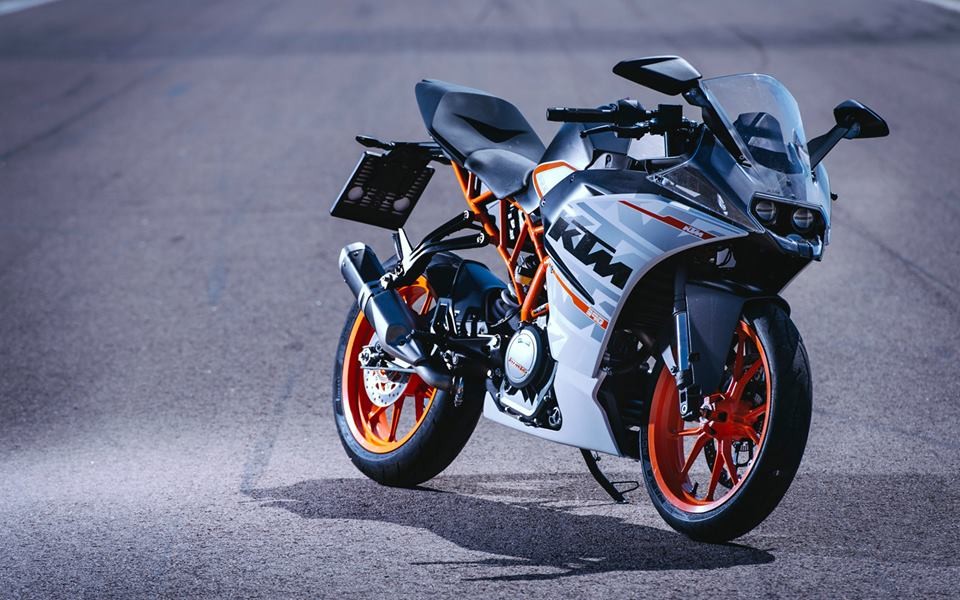 The power of this one comes from a liquid-cooled, single cylinder engine with 373cc capacity, producing 43 horsepower and maximum torque of 35 Nm.

Among the 400cc or fewer sport bikes being distributed in Vietnam currently, the KTM RC 390 is considered to have the most “squat” position because the clip-on handlebars are arranged a bit far and a little lower than the saddle. Currently, the price of KTM RC 390 is listed at 149 million VND.

As the sport version of the MT-03, the Yamaha R3 model also uses the same chassis and engine but has a completely different style and sitting posture.

The adventure bike has a plastic frame with the clip-on handlebars that connects the body to the front. This brings a sporty style and twin headlights with better lighting. Not only that, Yamaha R3 has officially launched a new version of 2019 with design improvements. 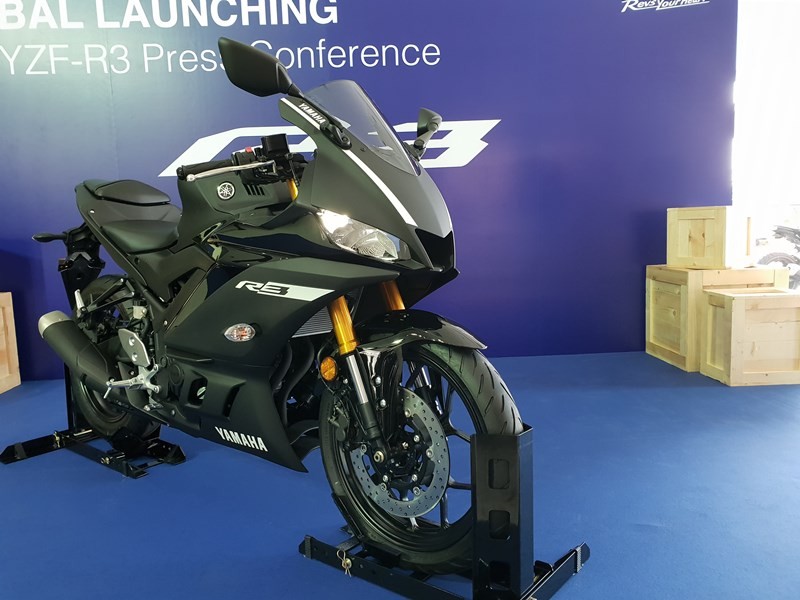 Yamaha YZF-R3 2019 has the R-series DNA design with an improved engine for maximum speed which is faster than 8 km/h compared to the previous generation.

Accordingly, the new generation Yamaha R3 owns the design style from the elder Yamaha R6. Instead of the sharp and slightly angular design of the old generation, the style is softer and more aerodynamic. In the middle of the bike is a large air intake. It prevents the pair of new LED headlights from being collapsed. The bike’s clock and the forks have been upgraded to a new look. The LCD format displays all information such as engine speed, gear level, fuel and temperature.

Overall, Yamaha R3 2019 has the appearance of a superbike because it is designed like the Yamaha YZR-M1 version. The rear end and engine remain unchanged. The power of the bike comes from a 321cc liquid-cooled, double cylinder engine block, producing 42 horsepower and the maximum torque of 29.6 Nm.

The current price of Yamaha R3 in Vietnam is 139 million VND. However, when Yamaha Vietnam imports the R3 2019 model, the price will be slightly higher.

Selecting the best adventure bike always depends on many factors. It can be the riding experience, user’s budget or their interest. But don’t be hesitate. Get an adventure motorcycle and see the rest of the world right away!